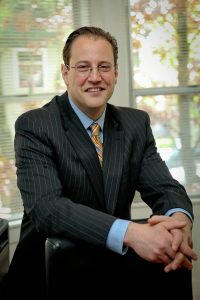 “Being arrested is a terrifying event. It shakes you to your core,” says McDaniel Reynolds, Founder and CEO of the Reynolds Defense Firm. He speaks from experience. At the age of 21 he was arrested for a DUI. “I felt like the worse person in the universe,” he recalls. He went on to graduate law school and become a prosecutor, putting thousands of people in jail for driving under the influence. It wasn’t until he left to start his own defense firm, representing DUI clients instead of prosecuting them, that he had a flash of insight. “In the vast majority of cases, both prosecution and defense want the same outcome: to make sure a person was impacted in a way that this never happens again.”

McDaniel and the Reynolds Defense Firm choose to impact their clients by seeing them as human beings whose lives have gone off track. It’s their goal to help their clients get back on the right path and see the arrest for what it is: a wake-up call. “It’s an incredible opportunity to change the things in life that haven’t been working for you,” says McDaniel. Below we talk with McDaniel about what sets his firm apart from other defense firms, the most fulfilling part of his job, and what happens when lawyers get ego out of the way:

Tell us a little bit about your firm.

The Reynolds Defense Firm specializes in one thing: we represent good people facing DUI charges. That’s all we do. And the definition of a good person is somebody that, regardless of what happened on the legal side, is willing to take a look at what went on on the human side and do everything they can to make sure they don’t end up in that situation again.

We opened our doors in 2003. We have five lawyers and a support staff. We serve the Portland Metro area primarily, but we’ll go anywhere in Oregon to the extent that it makes sense.

What sets you apart from other DUI defense firms?

We recognize that the law is not the answer, and the law is not enough. People have human problems that involve the law, people don’t have legal problems. And as crucial as it is to do a phenomenal job at the law (and we are phenomenal at the law) it’s not enough. People need to be taken care of during that time when they’re scared to death, completely shaken to their core in ways that they’re not accustomed to. So we look at our job as helping people on the legal side, and also helping people on the human side.

So how do you address that?

We try to do things the way we believe is the right way to do things. We try to take care of every person we represent. In fact, we only make one promise to every person we accept as a client: there’s only one thing in our complete control and that is that we’ll do the absolute best we can for this person.

We don’t make promises that we can’t keep. We don’t try to pump people up and push them into trial when it doesn’t make sense. The team of lawyers we have is pretty incredible. We do the best we possibly can to make sure that ego doesn’t affect our advice. We don’t fight because we can fight, we fight because it makes sense for our clients. When we don’t have our ego in this, it’s not about the lawyers, it’s about the clients, and that’s the way it should be.

What would you say is the most fulfilling part of your job?

We change people’s lives on a daily basis. Actually the right way to say that is: we help people change their lives. We help people see that the arrest is something that needs to be dealt with, but that’s going to be much smaller than their life as a whole. If you can improve your life, then this is a win no matter what happens in the law. And that is one of the most rewarding things we can do.